BESSIE CRIM AND WALTER AND CHARLES 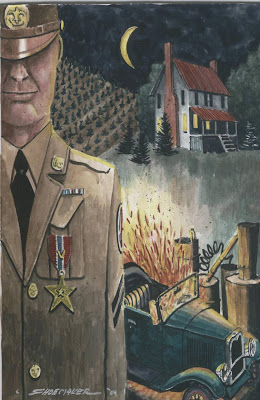 * * *
The short story to follow was penned in 1994 by my father. He gave it to me several years ago and I apparently put it for safe keeping inside the cover of Collected Stories of William Faulkner (Random House edition, copyright 1950) because that is where I came across it two nights ago. When I flipped through the Faulkner book, I discovered that it was at one time a library book of Western Carolina College that had been checked out at various times by Elaine Pruette, Mary A. Shuford, Lois Birch, Nell Robinson, Helen B. Roberts, and Joe Morgan-Rey. It was due to be returned to the library on April 7, 1959. I suspect that if Mr. Morgan-Rey were to return to the Western Carolina library today, he would almost surely be taken into custody and stripped of his possessions in order to bring his account current.

The book must have passed through mesne conveyances from Mr. Morgan-Rey into the hands of my father, for the latter's undated signature appears on the inside cover. It now occupies a comfortable place in my library, and I'll be sure to add my signature to it in order to continue the record of the book's dubious lineage. I have no idea whether my father would revise this story if given the opportunity today, and I'm not even sure he revised it a lot or at all when he wrote it. Yet, I think sometimes there is a delicate balance with short works like this, such that too much messing around with them after they are written can ruin the beauty and simplicity of the original idea and (worse) turn a good short story into a novella or a novel with excessive development.
Accordingly, I have reprinted Bessie Crim and Walter and Charles here exactly how I found it, revisions and editing be damned. It is, in essence, a story of loss, and it occurs to me now that, even though the events in the story concern a tragic event in 1944, the truths it conveys are no less important today.
One more note: you might have to read the damn thing twice to get it entirely. Perhaps like Faulkner, my father never deliberately made it easy on a reader if doing so would compromise any part of the work. So just plan to read it and then read it again.
* * *
Bessie Crim and Walter and Charles
Kinda cramped was the feeling she had there in the attic room. A mite stuffy, too. Didn't remember, she thought, how the wind could whistle through these heavy oak boards in spite of the newspaper covering most air spaces.

The old iron bed was still in place. No need to move it even if the mattress and box springs had been taken years ago. Nobody wanted it and unlike the mattress and springs, the frame didn't attract mice and other critters. Mainly, it just sat there and collected years.

Bending now to her task, she felt herself creak like the old house. Digging in first one then another musty cardboard box, she almost gave up. What's the use? Maybe it ain't even up here. Tugging on one box partly full of odds and ends of dishes, Bessie nearly toppled over.

"A fixin' to quit," she told someone later, "I came on a shoe box with the name of a shoe company that I could still read but not pronounce and when I nudged the lid off, inside was several pitchers that I thought back to.

"The second one from the top was the one I'd had in my mind for days upon days. As you can see there on the dresser, I've got pitchers galore but for some unknown reason this particular image wouldn't rest.

"Lookin' down at it, the first vision I had was the July day in 1944. Walter was at work at the floorin' plant. It was late enough in July for beans to be comin' in and I had just sat down on the front porch to snap on a bushel Walter and I had picked the evenin' before when I heard the cough of a car.

"A little dust eddy flared up in the road and I thought how peculiar. First dust devil I'd seen all summer.

"A drop of sweat kinda rolled to the end of my nose and I brushed it back into my hair with the crook of my elbow and looked steady at the two young fellas gettin' out of a brown car with TAXI on both doors. The taller one, the driver, took off his hat first and put it under his arm.

"When they reached the first step of my porch, I could see they both had close-cropped hair and, of course, full uniforms on. Fancier than most, but I knew without thinkin' they were Army men like Charles.

"Walter come home in an Army uniform just before we were married. Slight and handsome, he wore that uniform till I thought for sure he was going back. I told him, Walter, the war is over and you're not a soldier so why you don't take that brown thing off and put on some normal clothes I don't know. Now that I think about it, Walter was kinda proud of that uniform. He wouldn't admit it.

"I think the day he took it off for good was the time my Daddy asked him, said, Walter, just where did you take that uniform, in the war, I mean?

"There wasn't much to talk about after that because Walter never got any farther than Fayetteville. Don't get me wrong, there was nothing wrong with that. Lotsa boys pulled their duty in places that wasn't none too dangerous. I don't think anybody helt that against any of 'em. They went where they was told and done what they was told. That's what Walter said often. Sometimes late at night lying in bed, Walter would want to talk about his war experiences and everything that went on. He never failed to say he was ready to go anytime. Anytime, he'd say. Anytime.

"And, then almost like the feeling was new, looking down at the face of my boy seven, eight years old, I thought the guilt would suffocate me again.

"Law, you don't know how many times I prayed over that in church and sometimes over a pan of cornbread. If I had the tears I've shed in a tub, it'd be as deep as a well.

"Finally, one time, I couldn't take care of it myself any longer and I stopped our preacher one day on the street in front of the old West Jefferson hardware store. I'd gone there to get some thread. I asked him how long a body was supposed to carry the burden of guilt of a terrible, terrible thought.

"It was Preacher Harvey. You know, the one that later ran off and never came back. Then, we had a lot of faith in the man and he said, do you continue to think that same thought, Bessie?

"No, I told him. Not in the same way. I remember thinking it, of course. Who could forget such a thing? But, I said, my feeling about it has changed.

"He looked me dead in the eye and said there on the sidewalk, God has forgiven you, Bessie. Go on about your business.

"See, the porch just seemed to go out from under me when the Army fella began to speak. There ain't no way to use the words God give us to tell nobody what feelings goes with something like that.

"Holdin' on to the pitcher, I eased back down those nary little steps that Charles run up and down a dozen million times and went and sat in the living room. I was there quiet and alone for the better part of an hour. It seemed enough.

"Once I glanced over to Walter's chair just to imagine him sittin' in it and smokin'. But it was dim and I could not hold on to that vision of Walter for long.

"I'm not sure I heard all the words. In fact, I'm sure I didn't. Couldn't have. It was a sniper, though.

"The sound of that single shot came back to me the day the Army buried Charles. It was the twenty-one-gun salute.

"When I left the graveyard that day, all I had with me was Walter and that flag they gave me and that awful memory trailin' along behind me like a youngin' a pullin' a wagon.

"I didn't really mean what I thought that day on the porch. What I prayed for . . ."

"Walter knew, Bessie. He knew. You know that he knew. How could a man not know?"

"I know, Bessie. But when he came home near dark that day from work and you still sittin' there with not a bean touched, he sensed. A change had settled over your house. You looked at Walter different. How you can show a man guilt and give it to him too at the same time is something to be explained. But you did it, Bessie. You did it."

"When my sister and her husband got there, everything was packed for me to go except I carried the pitcher of Charles. I didn't want to take any chances with it gettin' gone somehow.

"Luke - that was her husband. Her second husband, really. Not a lot of people know it but she married first to a man travelin' through and it seemed he never did get over or done with travelin' because he never slowed down. Luke wasn't as interestin' but he didn't like to move much.

"He picked up those old suitcases and carried them out and put 'em in the trunk of his car.

"Em, my sister, got in the front beside Luke. I was already in the backseat by myself. Luke backed up to turn and I told him to stop. I wanted to see my house through the glass.

"A few boxes of quart jars sat on the porch near where I first saw the soldiers drive up. I used them jars to can a many a time. Just needed new lids every year.

"To Em I said as big as day, Em, I was sittin' right there in July of 1944 when I tried to wish and pray Walter off the face of this earth."

"When they read the telegram, I only had one real thought: make it go away. The only thing I could come up with was if Walter had not come back. If he had died in the war instead of Charles, I would not be livin' this moment in this way. God forgive me, but I did."

"Don't 'cha see? Walter was already gone. Tellin' didn't matter anymore. I could tell Em was set back some but it didn't slow Luke down any. He drove me straight here and set me and my bags off.

"See this pitcher? It was the only part of my life not sittin' there on the sidewalk."

"Go to sleep, Bessie. Tomorrow will be another day." [The painting I have reproduced above in two or three different forms is an original work by Stephen Shoemaker, an artist local to Ashe County, North Carolina who prepared this painting at the request of my father for the cover of A Poor Man's Rain, a novel that was published last year or the year before that.]
Yours very truly, H. Philip Aster at 2:48 AM